I’ll start with the violin. My elementary school had violin lessons and practices after school. Since I was so young, I don’t remember if my mom made me do it or if I choose to do it. My sister also took the violin lessons, so that might have been a reason why I did too. Either way, I loved it so much. I believe I started taking the lessons around 1st grade. Over the years, I learned how to play a lot of simple songs like “Mary Had a Little Lamb” and “Up on the House Top”. There were more, but it’s been years and I don’t remember much. I also learned the proper way of holding a violin, how to read violin sheet music, and the proper fingering techniques. I remember my chin and arm would hurt after each practice because you had to hold your arm at some weird angle and rest your chin on the hard chin rest. To this day, I still don’t think I was able to hold a violin right.

I stopped playing the violin after I left elementary school. I wanted to continue, but the middle school that I went to didn’t have violin practices. It’s been eleven years now (holy cow, I’m old) since I’ve played. I kept it in my closet and would take it out once in a blue moon. Of course, I was rusty when I did play it. I was once told that I should start playing again because I’d be sitting on my talent if I don’t. Who knows if I’ll start playing again? When I went to look for it the other day, it wasn’t in the closet that it was supposed to be in. I think my mom might have moved it someplace else, but I couldn’t find it anywhere 😦

My second instrument is the piano, which is what I like to call my main instrument. It’s the instrument that I play the most and the one that I’m best at. What got me started on the piano is when my mother bought me and my sister a keyboard for Christmas (I think?) many, many years ago. I wanna say it was when I was about eight-years-old. I loved playing on it, and I would play songs that I knew by ear. My sister thought it was amazing that I could do that, but it seemed normal to me. I would match the key of the song to whatever key I would play on the piano. This was before I had any experience with music, except maybe the violin. I still don’t remember which instrument I started first. It’s been so long haha.

In the 6th grade, I took a chorus class where we also played the piano for a small portion of the class. It was during that class where I learned how to read piano sheet music, about the major scales, and about the music notations. Even though I wasn’t fond of that teacher, I did learn a lot in her class. I learned even more during two years of keyboard class in the 10th and 11th grade. I learned more in depth about music notations, I learned more about the major scales and the three minor scales, I learned the proper fingering technique and posture when it comes to playing the piano, I learned more on time signatures, and much more. It was because of that class that I’m able to play the piano using two hands better. Even though I know how to read sheet music, I still like playing by ear more.

Finally, we get to the guitar. It was the last instrument that I learned to play. What got me into the guitar was a small after-school club called the Guitar Club. I thought it would be fun to learn another instrument, so I decided to check it out. After practicing on someone else’s guitar, I asked my mom if I could get my own guitar, so we did. At Guitar Club, I learned how to play some chords and how to properly hold a guitar. 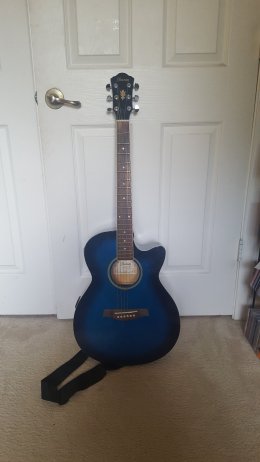 This was the hardest instrument for me to learn. It could because I started learning it pretty late in my life compared to when I started the violin and piano. Also, pressing my fingers against the strings hurt so bad. The woman teaching me how to play the guitar explained that it will hurt at first and that you’ll develop callouses on your fingers after a while. It was hard for me to stretch my fingers into certain chords, but she told me that practice makes perfect. I don’t play the guitar as much anymore. As a result, my fingers start hurting again when I do decide to play.

Another instrument that I’ve been curious to learn is the steel drums. I love the Caribbean vibe that I get from hearing them, and they seem pretty easy to learn. I’ve had a fascination with the ukulele and would like to learn that instrument as well. What instrument do you play, and for how long?

View all posts by Tasha