Warning: Contains spoilers. If you haven’t seen Deadpool 2 yet, do not continue reading. You’ve been warned.

I went to go see Deadpool 2 on Saturday evening with my boyfriend. I’m not big of superhero movies, but I enjoyed this one. It was super funny, first of all, and I liked the overall message of the movie.

I haven’t seen the first Deadpool (again, I don’t watch superhero movies) but after seeing the second one, I considered watching the first one. My boyfriend had to explain the recurring jokes that went on throughout the movie. Deadpool had cancer in the first movie, and in this one, he joked a few times about how he was a big pile of cancer. He also joked about him looking like an acid burn victim, which he was in the first movie. I was wondering why his face looked like that during the movie. It all made sense once he explained that to me.

What made the movie interesting to me was when Deadpool tried to protect Russell from getting murdered by Cable. I understand his motive for wanting to kill Russell; he killed the Cable’s daughter and wife in the future. At the same time, Russell’s still a kid. It was hard to pick a side for me. I didn’t like Russell because he was a brat, but he was a brat because he had a hard life at the orphanage. I hated him, but I also felt bad for him. So many mixed emotions!

What also got to me was when Deadpool’s girlfriend, Vanessa was shot and died. Even though I didn’t know much about their relationship, I could tell that they were in love. It made me wish that I could’ve seen more of them in the first movie. His reaction to when she was shot made me get all the feels. I felt so bad for him when he had his downward spiral after she died. I was low-key hoping that she would somehow come back to life and they would live happily ever after, but Deadpool wasn’t that kind of movie. It was also sweet how Vanessa wanting children influenced Deadpool to want to protect Russell like his own child.

I loved the character Domino! She was my absolute favorite character in the entire movie. It was hilarious how she was so lucky during all the fight scenes. What made it funnier was that Deadpool didn’t believe that luck was a real superpower, and she proved him wrong by getting lucky every single time. Domino is such a badass and has such amazing hair, too. I also loved Deadpool’s friend and taxi driver, Dopinder. His awkwardness and weirdness are what make him so admirable to me. My favorite scene with him is at the very end of the movie when he runs over the headmaster of the orphanage. 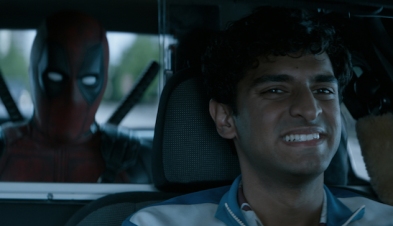 There are too many funny moments in the movie to mention all of them. The ending where Deadpool jumped in front of the bullet to save Russell was funny because he took so long to die. I know that sounds awful, but he kept giving farewell speeches and wouldn’t die. It made me grow more attached to his character. It was also super funny when Deadpool kept accusing Cable of being racist because he killed that one inmate from the Ice Box. Another memorable moment was when all the “superheroes” that Deadpool recruited died in different ways after jumping out of a plane. All of them except for Domino, of course, because she’s amazing.

I don’t think there was any moment of the movie that I didn’t like. I went in expecting to not enjoy it because I’m not into those kinds of movies and because I knew it was two and a half hours long. These are my personal opinions on how I felt about Deadpool 2. What did you think of it?

P.S. these images do not belong to me.

View all posts by Tasha